One of the goals of the JWLI Fellows Program is to encourage women to be leaders in Japanese communities and society.  The following article illustrates some positive changes in Japan's corporate culture.

Japan ranked in 101st in the “gender gap index” study by the World Economic Forum, an international nonprofit that measured the economic opportunities and political empowerment of women by nation in 2009. Iceland ranked No. 1, while the U.S. was No. 31.

Japanese women make up just 9% of senior officials and managers—a tiny share compared to 43% in the U.S., 17% in China and 38% in France, according to data from the International Labour Office compiled by Catalyst Inc, a New York-based nonprofit that pushes for business opportunities for women.

Morra Aarons-Mele, the founder of consulting company Women Online and an expert on women’s professional development, thinks it’s not enough for a company to have smart women who know how to market to women, and says it’s more critical whether such women get to rise to leadership positions.

“If the Panasonic women’s products are simply a public relations stunt or a fun marketing idea that won’t go much further, then I do think they are unfairly typecasting women product designers,” she told The Associated Press.

“If these new programs help some women designers get noticed and promoted to a place where they can take the lead in designing many products, not just hair dryers, then I think it’s great.”
Whatever the wares, Yamada is confident her team of women has mastered the way to a Japanese woman’s heart—something she says her male counterparts and bosses can’t hope to match.

(full Japan Today article)
Posted by Center for Gender in Organizations at 11:29 AM No comments:

One of the goals of the Japanese Women's Leadership Initiative- both the Fellows Program and the Forum- is to inspire Japanese women and men to take on leadership roles in the nonprofit sector and thus impact social change in Japan.

Harvard Business Review offers Five Tips for Leading Campaigns for Culture Change:
Everyone agrees that culture is the hardest thing to change, whether ethics in the financial system or the eating habits of individuals. That's because change is not a decision like appointing a new CEO, nor is it an event like winning an election. Change is an ongoing campaign.

Even in a hierarchy, top officials can declare a new policy or restructure by fiat, but they can't change behavior without a campaign to win hearts and minds. If culture change is difficult within a company, it is even harder in looser systems such as communities and countries. (full HBR article)
Posted by Center for Gender in Organizations at 6:45 AM No comments:

Does Leadership Really Matter in Nonprofits?

It seems clear to me that leadership is the most important of the three legs nonprofit organizations stand on (the other two being strategy and capital). Nonprofits can develop sound strategies and attract sufficient capital, but without strong leaders at the helm, they're unlikely to deliver outstanding results. (full Harvard Business Review article)
Posted by Center for Gender in Organizations at 6:41 AM No comments:

Click on the images below to enlarge the 2010 recruitment flier! 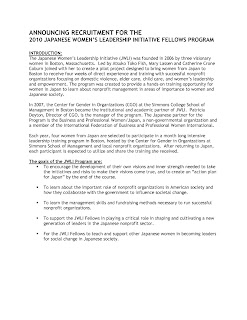 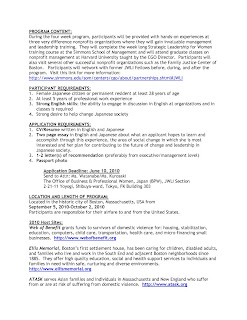 Posted by Center for Gender in Organizations at 12:03 PM No comments:

Welcome to the blog of the Japanese Women's Leadership Initiative! Please be sure to visit our main website.

About the Japanese Women's Leadership Initiative

Since 2007, four Japanese women have been invited to Boston each year as Japanese Women's Leadership Initiative Fellows to learn about the American nonprofit sector and to develop their leadership potential. The program includes hands-on training with successful Boston based nonprofit organizations and tutorials in the areas of nonprofit management as well as the “Strategic Leadership for Women” training program at the Simmons School of Management (SOM). Each Fellow develops an action plan for implementation upon return to Japan that addresses the goals of her vision and dreams.

Additionally, The United States-Japan Foundation, based in New York City, approved funding for a three year grant to CGO to create the Japanese Women’s Leadership Initiative Forum Program in Japan. The new program is based upon the success of the US based Japanese Women’s Leadership Program, now entering its fifth year at the SOM, coupled with the growing interest in nonprofit organizations because of the keen needs of society in Japan, the growth in recognition of the Japanese government of the value or nonprofits organizations and the interest of more women in Japan to take on leadership roles. The program is designed to provide a three-year series of seminars and workshops in Japan as part of the movement to create social change by strengthening the capacity of women to provide leadership and work effectively for change while educating a broader audience about the value of the nonprofit sector and its potential role in addressing social issues.

The program is managed by the Center for Gender in Organizations at the Simmons School of Management and collaborates with Business and Professional Women of Japan (BPW/Japan).

The Center for Gender in Organizations, Simmons School of Management

Promote Your Page Too